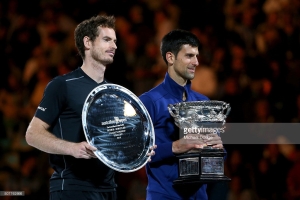 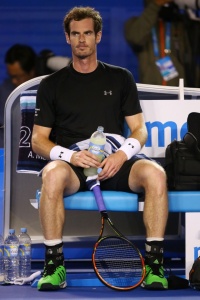 Right before the beginning of Roland Garros finals 2014, here comes this girl, beautiful one, and in a press conference she says she is Andy Murray’s new coach. Andy fans were talking about it, speculating, for some days now.

2014 wasn’t the best year in tennis for Andy Murray. For many many players, that results would have come as heaven, but not for Andy. We, the fans, were by then very adjusted to the grand slam finals, the Olympic medals, the Masters 1000 trophies. We grew accustomed to the success and we weren’t going to settle for less.

So, we (and by we, I mean me, Lucía) weren’t very happy with Ameliee. You see, there is always an egotistical side of everything, and this is no exception. When Andy wins, I feel the high, the rush, the excitment. If Andy loses, the bad mood comes and not only that, but I have to bear and put up the people that are fans of Federer, or Nadal o whoever was the guy who won the match vs Andy.

Specially after the Roger Federer masacre over Andy, that was so ruthlees, that even the guy apologized to us (his fans).

Sorry about tonight, roger was incredible and I had no answers, support this week has been so good and wish I could have done better

After that match, I really didn’t want Amelie. I never ever said anything against her, as a woman, as a person or as a tennis coach. I said, that she wasn’t good for Andy, that he should look for another option in coaching, that the combination wasn’t working.

That was the egotistical part of me, of course. Because, really, who am I to say anything?

In little more than a couple of months, the man is playing excelent tennis, even better than, and I stand by my words, even better than when he was with Ivan. So I owe her an apology. I aknowledge that if is not of my business, and is not, what the hell am I talking about. I’m a person who does not appreciate when somebody comes and gives me unsolicited advice. So, hey! I may stop doing what I hate when’s done to me.

Good job, Ameliee, thanks in advance for making me tennis happy the whole 2015

I found this note on the internet, I think is worth the reading: Andy Murray may have to beat world No.1 Novak Djokovic if he is to reach his third straight final at the Australian Open, while Federer and Nadal feature in the same side of the draw for the first time in seven years Andy Murray has been handed a tough draw for the Australian Open and faces the prospect of having to beat world No.1 Novak Djokovic if he is to reach the Melbourne final for a third successive year. The Scot opens the first Grand Slam of the year with a tricky test against talented teen Ryan Harrison, with the prospect of a fourth round meeting with Gael Monfils, a quarter-final against 2008 finalist Jo-Wilfried Tsonga and a semi-final against Djokovic, who beat him in a convincing three sets in last year’s final. And the Serb seems in confident mood ahead of his challenge for a third triumph at Melbourne Park, where his 2011 victory kick-started an incredible season to follow. «I’ve been playing the best tennis of my life, especially in the first six months of the season,” said Djokovic. “I guess it probably started here in Australia. I played incredible in the later rounds and it gave me a lot of confidence and put the wind on my back. “Mentally I gained that necessary strength. I began to believe I could win the major tournaments along with the big names Federer and Nadal. They have been the two most dominant players in the game. They have been my two biggest rivals along with Andy Murray.” Meanwhile, Federer and Nadal have been drawn in the same half of a Grand Slam draw for the first time since the 2005 French Open – when the Spaniard went on to beat Federer in the semi-finals – while home hopes Lleyton Hewitt and Bernard Tomic have been handed more favourable draws. Wildcard Hewitt faces world No.83 Cedrik-Marcel Stebe while Tomic opens his account against the often unpredictable Fernando Verdasco – less of a daunting prospect after his wins over Tomas Berdych and Gael Monfils at the Kooyong Classic event this week. http://www.tennishead.net

Me gusta Cargando...
Look! we all are going to play in Australiaaaaa!!!